Veterans Injured by Defective Earplugs May Be Entitled To Compensation Are you a Veteran suffering from tinnitus, or partial or total hearing loss?  If so, you may qualify for compensation due to your use of Dual-Ended Combat Arms Earplugs (CAEv2), manufactured by 3M and issued to Veterans exposed to loud environments, including those deployed to Afghanistan and Iraq, between 2003 and 2015.

According to recent reports released by The Center for Hearing and Communication, hearing loss affects 48 million people in the United States. While some people are born deaf or with hearing impairments, many more people experience hearing loss due to environmental factors. In fact, noise exposure is the leading cause of hearing loss.

Noise exposure can come in many forms. Whether you are exposed to noise while working, during recreational activities, or while serving our country,  hearing loss from noise exposure is preventable. Most often, we protect our ears from noise by using earplugs.  But what happens when earplugs fail?

Veterans are exposed to many environments in which hearing loss can occur. Shooting weapons, explosions, and machinery exposure can all lead to hearing loss. 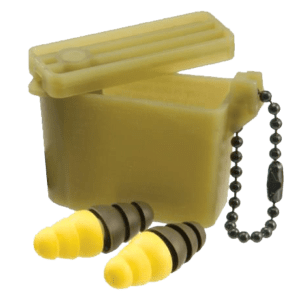 In recent decades, the United States military has made hearing loss prevention a priority. One of the ways in which the military attempted to prevent hearing loss was by issuing earplugs to individuals serving in the military. From 2003-2015, Veterans exposed to loud environments, including those deployed to Afghanistan and Iraq, were issued Dual-Ended Combat Arms™ Earplugs (CAEv2), manufactured by 3M. For 12 years, the U.S. Defense Logistics Agency issued these plugs to thousands of Veterans who served overseas.  We have since learned that the earplugs were defective and failed to protect our soldiers.

The 3M earplugs sold to the military had issues with their “dual-core” design. The design allowed military personnel to use the earplugs in two different ways. They could be used as traditional earplugs, or they could be flipped over to provide hearing protection from explosions and gunfire while allowing the soldiers to communicate freely.

When used in the traditional way, they blocked all noise. When the plugs were flipped, however, they only blocked some noise. While that issue alone may not seem like it would cause a problem, the alleged design flaw was due to their size. Current lawsuits allege that the earplugs were too short to provide the intended level of hearing protection. Once inserted, the plugs had a tendency to loosen, thus rendering them useless.

Based on findings from a recent class action lawsuit, 3M and their predecessor, Aearo Technologies, allegedly knew the earplugs were defective but continued to sell them to the military anyway. As a result, 3M has agreed to pay the federal government for failing to disclose the design flaw.

3M sold the government faulty dual-ended Combat Arms Earplugs, Version 2 (CAEv2), which were standard-issue equipment for certain branches of the US military until they were discontinued. 3M failed to disclose design defects, even though they were apparent as early as 2000.

The earplugs’ defects are likely to have caused tinnitus (ringing or buzzing in the ears) and significant hearing loss in thousands of soldiers who served from 2003 to 2015. A class action suit is underway,  giving Veterans an opportunity to hold 3M accountable and receive the compensation they deserve.

While Veterans of all eras struggle with hearing loss, only certain Veterans are impacted by this class action lawsuit. Veterans exposed to loud environments, including those who served in Iraq and Afghanistan, are especially vulnerable.  You may qualify if you:

What should you do?

Since 2008, Jan Dils, Attorneys at Law, has helped thousands of Veterans get the VA Disability Benefits they deserve. We know that hearing loss impacts millions of Veterans, and it is one of the top claims filed by Veterans every year. If you are a Veteran struggling with hearing loss, you may be entitled to compensation.

Call Jan Dils, Attorneys at Law today for a free consultation. Our toll-free number is 877.526.3457.  If you can’t talk now, fill out this form and a member of our team will contact you at a better time.