What are the signs of Nursing Home Neglect?

At the age of 14, when other teens were hanging out at the mall, going to dances, and being social, I was visiting my father in a nursing home. When most people 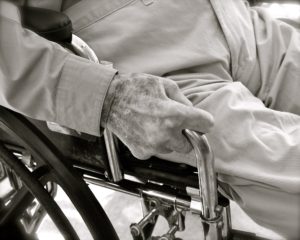 realize that I was only 14 and had a parent in a nursing home, they assume that my father was one of those new-age senior citizens who have children well into their sixties. Unfortunately, that was not the case with my dad. He was only 41. His body was weak from two years of battling brain cancer and having multiple surgeries. We tried taking care of him in-house, but it became too much for us. We decided that a nursing home was our best bet to give him proper care. It turns out we might have been wrong. I recall going to the nursing home one day to visit my father and I saw what would eventually be the beginning of the end.

Due to my father’s chemo, and the fact that had tumors in his brain, he was weak. He could not get in and out of bed on his own. One day in August we were visiting him. The nursing staff was helping my father back into bed when they didn’t give him proper care. Instead of laying him in the bed gently they let go early, and his head went crashing into the headboard. I was sitting next to the bed and saw it all happen. My father’s head hit on an edge of the headboard, near where he had surgery recently. Granted, this was 18 years ago, and I am no Doogie Houser, but I believe this impact caused my father’s shunt to quit working. Five months later we were planning his funeral. What I described was a not typical case of Nursing Home Neglect, but it’s too painful for me to discuss some of the other things I witnessed. At the time, nursing home neglect was not as mainstream as it is now, and we were not the type of family to sue anyone. We had just lost the patriarch of our family after a very long and stressful two year battle with a terrible disease. Now, in 2017, the Statute of Limitations has passed, and all I can really do is educate other people about the subject, and tell you what to look for with your loved ones.

Nursing home abuse and nursing home neglect are broad terms used to define a variety of offenses within the nursing home abuse. They can refer to something as simple as not attending to patients on a regular basis, to sexual abuse and rape. The subject is truly disturbing to talk about too.

Instead of examining specific cases of nursing home abuse, let’s look at things in a little more general fashion today. What are some signs of Nursing Home/Elder Abuse you should be on the look out for with your loved ones?

–      Emotional or social neglect, where the elder person is repeatedly ignored, left alone, or accidentally snapped at by an overstressed nursing home staff

–      Personal hygiene neglect, where patients do not receive adequate help with laundry, cleaning, bathing, brushing their teeth, or other forms of hygienic practices

–      Basic needs neglect, where the nursing home neglects to provide reasonable food, water, or a safe and clean environment

–      A growing lack of friendly interaction with the nursing home staff

If you suspect a loved one is a victim of nursing home neglect or elder abuse, report it to the proper authorities. If you’d like to know more about your legal options, give us a call today for a FREE consultation. Our toll-free number is 1-877-526-3457. If you can’t talk now, fill out this form, and we will get back to you.